Resident during 2016.
Carla Wolfs from the Netherlands who visited on a professional residency during 2016 returned early in 2017 as a Self Directed Residency artist. During her stay Wolfs developed her technique of carving high-density foam molds and forming her familiar latticework forms. Unlike her previous visit the forms were enclosed and gave the impression they had been wrapped around solid shapes. Some morphed from solid to carved forms to very striking effect.
As self-directed resident the artist was not required to teach a Masterclass, however, on this occasion Wolfs taught a very well attended short course in the making and use of Paper Clay.
Although not a requirement of a self-directed residency Wolfs donated a piece to our AIR collection. 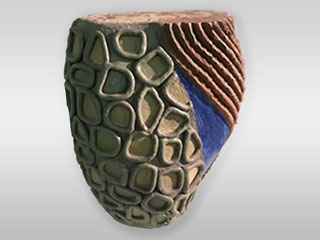