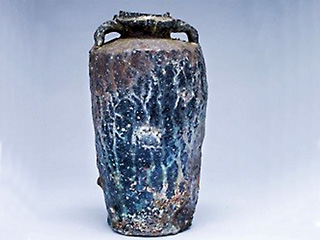 Featured Image: Ian Jones,
Granite Clay Vase, year unknown.
Image courtesy of artist (cropped for web).
2019 is Ian Jones’ 40th year as an independent professional potter, a moment to be celebrated by this exhibition of current work.
Jones has been making natural ash glazed wood-fired ceramics at Old Saint Luke’s Studio in Gundaroo since building a 14 metre anagama kiln there in 1984.
In conjunction with his wife, the potter Moraig McKenna, he has attempted to make their studio into an informal “centre of excellence” in anagama firing, where they have worked with and mentored Australian and international potters and students of ceramics for periods of up to 6 months. This has included potters such as Hervé Rousseau from France, Svend Bayer from the UK, Woo Sihyeong from Korea, Tani-Q from Shigaraki, Japan, and young potters from France, Switzerland and Australia.
In 2013 and 2014 in conjunction with the ‘Awaken the Dragon’ festivals, Jones was the invited Director of Firings for firings of the 44 metre and 36 metre long dragon kilns at Jalan Bahar. He also presented a paper, ‘The Development, Evolution, Spread and Use of the Dragon Kiln’, at the Dragon Kiln Symposium held at the Nanyang Technical University, Singapore.
Inspired by his deep interest in the contemporary wood-fire movement, in 2008 Jones started a course of study for PhD at ANU examining the sources of the natural ash glaze, wood-fire aesthetic. Due to some personal setbacks it wasn’t completed until 2016; his dissertation title is “Wabi-cha and the Perception of Beauty in Wood-fired Ceramics”.
Jones lived in Japan for three years in the early 1990s studying ceramics and teaching English. During this time he assisted Honma Shunuchi in Fujisawa, Asao Kempei in Iga-ueno and Kudo Shuji in Miyagi Prefecture with firings and attained Level 2 in the Japanese Proficiency Exam.
As an established potter with both a national and international reputation, this exhibition is an important inclusion in our 2019 exhibition program and a fitting end, bar the Christmas Fair that follows it, to our exhibition year.

We produce a monthly newsletter that has information that may not be on this website. Subscribe free of charge.