Hidemi (Demi) Tokutake was our first AIR participant for 2015. A Japanese born ceramicist, Demi divides her time between Japan and Australia. She first studied at the Seto Ceramic School in Seto, Japan. In 2013, she studied at the National Art School in Australia where she finished the Master’s course, majoring in Ceramics, and became a member of the International Academy of Ceramics (IAC). When she first came to Australia, the unique shapes and attractive detail of Australian fauna – forms that do not exist in Japan – immediately fascinated her. Her work practice has evolved from a traditional and craft aesthetic in Japan to a more sculptural sensibility today. Australian native plants, including Banksia, various flowers, and seedpods inspire the organic ceramic forms and colourfully dynamic surfaces of her work. In her work, Demi seeks to capture the underlying pulse of the natural Australian environment.
Demi has had solo exhibitions in Australia, Taiwan, Denmark, Scotland, and the USA and participated in group exhibitions in Japan, Australia, the USA, Belgium, Morocco and Korea.
During her residency, Demi presented an artist talk (open to CPS members and non-members) at which she presented a slide-show of works by Japanese master potters and the tradition in which she originally trained. She talked about how she was drawn to more free-form sculptural works with surfaces showing the marks made during the making process. She finished with images from Sculpture by the Sea in Sydney in 2014, in which she was accepted to exhibit.
Demi’s two-day Master Class encouraged her students to “Think Big’ as she took them through the process of her intricate and physically demanding hand-building techniques. Demi’s exhibition in the gallery from the 12-29 March attracted strong interest, including attendance at the opening by a representative from the National Gallery of Australia.
Demi kindly donated one of her ‘tripod’ vessels and also left a number scattered around the grounds, adding to the ceramic artworks that are becoming a permanent feature enhancing Watson Arts Centre. 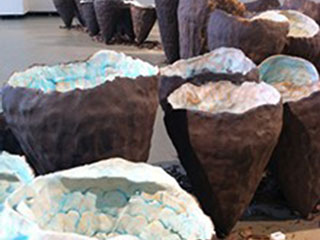