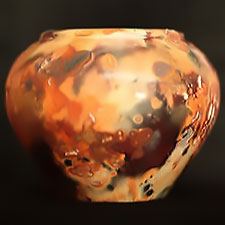 Chris is currently potting full-time and divides his time between his home studio and the Wellington Potters’ Association (WPA). He works in two main areas – pit, barrell and saggar firing, and vessels decorated with a mosaic of glazes and lustre fired in electric kilns to cone 6.
Chris has exhibited widely in New Zealand, at the Artspace Gallery in Wellington, the New Zealand Academy of Fine Arts and in the past two years has had work selected for the Wellington Potters Exhibition, the New Zealand Potters regional and national exhibitions, and exhibitions held at the Academy of Fine Arts in Wellington.
Chris is on the committee at the Wellington Potters’ Association.
During his residency at Canberra Potters he will continue to explore low fired ceramics and will lead a workshop which will include making work suitable for barrel and pit firing, including burnishing. Constructing pit, barrel and garbage bin kilns and preparing work for firing using various techniques.

I would like to research the process of ‘chemiflouresence’, how colour is created in the fire and absorbed by ceramic bodies from the fumes of materials such as sodium in salt, and potassium in banana skins, and how to optimise firing conditions.